DiSalvo to Leave in 2019, Search for His Successor is Already Underway

After five years on the Hilltop, Steven DiSalvo announced that he would be stepping down as the President of Saint Anselm College.

When DiSalvo became president in 2013, he was the first president of the College to come from outside of the monastery. Instead, DiSalvo had a long history in higher education. Before coming to Saint Anselm, DiSalvo was the President of Marian University in Wisconsin, a school of 1,680 undergraduates and 500 graduates.

The president announced his decision to the school community in an email Friday. In his letter, DiSalvo thanked the Anselmian community for welcoming him and acknowledged the strides he made as president, writing, “As I make this announcement, I am filled with pride in the progress that we at Saint Anselm have made, and deep gratitude for the privilege of leading this unique college.”

The College website casts DiSalvo’s tenure in a positive light. “[DiSalvo] has advanced the college’s national reputation through scholarship, athletics and via the prestigious New Hampshire Institute of Politics operated by the college,” it says.

The New Hampshire Institute of Politics growth and development has been a high-point under the DiSalvo Administration. The chaotic 2016 campaign was handled with great care on campus and the school was again chosen to host debates during the Democratic and Republican primaries, though it is not clear how much of the credit DiSalvo deserves for this.

Madison Mangels ‘19, a Politics major, said, “I’m not entirely aware of anything specific he has done for the NHIOP. When I think of work done on NHIOP, I think of Neil Levesque and the rest of the NHIOP staff as well as the professors.”

In a press release posted on the College’s webpage, the Chair of the Board of Trustees published a list of DiSalvo’s accomplishments, including an increase in the College’s endowment and retention rate, the completion of $48 million in capital improvement projects, such as the Roger and Francine Jean Student Center Complex, and the hiring of a Chief Diversity Officer.

Abbot Mark Cooper, O.S.B. ’71 praised Disalvo, saying, “Much has been accomplished during Dr. DiSalvo’s years as president, and all of us are most grateful for our current strong enrollment, our ever-increasing endowment, and especially for the recent news of our making the list of the top 100 liberal arts colleges in the United States.”

His administration has not always been positively received, however. In the fall of 2015, some student-athletes and alumni protested DiSalvo when he announced plans to transfer Saint Anselm to a Division III school. Despite persistent exploration of the possibility throughout the 2015-2016 school year, Saint Anselm decided to remain a Division II school.

More recently, DiSalvo came under fire this summer after 13 Saint Anselm College employees were abruptly laid off over the summer. No official acknowledgment of the layoffs was ever made to the student body. He did address Saint Anselm staff after the layoffs and was escorted out of the premises by security officers. Rumors of his firing or resignation have surfaced ever since.

Shortly after the layoffs were announced, the College announced that Chief Financial Officer Eric Norman was leaving his position. The job is now occupied, at least temporarily, by Bill Furlong.

Student reaction to DiSalvo’s departure has been mixed. Jackson Peck ’22, an SGA senator, said he was “sad” to see Dr. DiSalvo leave. “I have not been at this college long enough to determine DiSalvo to be [an] effective or ineffective leader; however, I can see with certainty that it is important for every organization or institution to have a strong leader at its helm.” He continued, “At times where the president’s leadership ability is brought into question it undermines the ability of students to establish meaningful relationships with the administration.”

One Saint Anselm graduate shared the college’s press release on her Facebook page with the caption, “About time👌.”

The unofficial results of a Twitter poll being conducted by The Hilltopper show that 50% of respondents said they were pleased with Dr. DiSalvo’s decision to step down as Saint Anselm College president while 17% said they were not. Of those who took the survey, 33% said they were unsure or had no opinion on his departure.

In his letter, DiSalvo confirmed that there was a search committee underway to find a successor. Speculation is already underway about who may be the college’s next president. A rumored shortlist that was passed on to The Hilltopper by a reliable source includes Dr. Joe Horton ‘77, who was one of the 13 employees let go over the summer, Fr. Jonathan DeFelice, who served as President of the College before DiSalvo, Fr. Jerome Day of the monastery, and professor Gary Bouchard, who now oversees the recently-established Humanities Institute. A fifth candidate, a woman, is rumored to be undergoing the vetting process as well, but The Hilltopper did not learn of her name.

The nature of the list signals a clear interest in choosing a new college president who has deep ties to the Saint Anselm community, which may be intentional in the wake of DiSalvo’s tenure.

While The Hilltopper received no official confirmation of the shortlist above, it deemed its source credible enough to reach out to the candidates whose names appear on the list. We maintain our commitment to transparent reporting and will update our readers as we continue to assess the accuracy of the list.

Nick Fulchino is the Editor-in-Chief of The Hilltopper and a senior at Saint Anselm College. He is from Pomfret, Connecticut. View all posts by Nick Fulchino

4 comments on “DiSalvo to Leave in 2019, Search for His Successor is Already Underway” 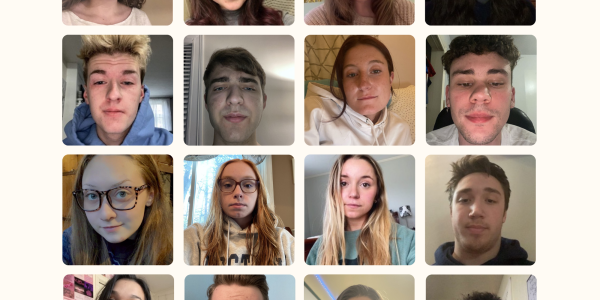