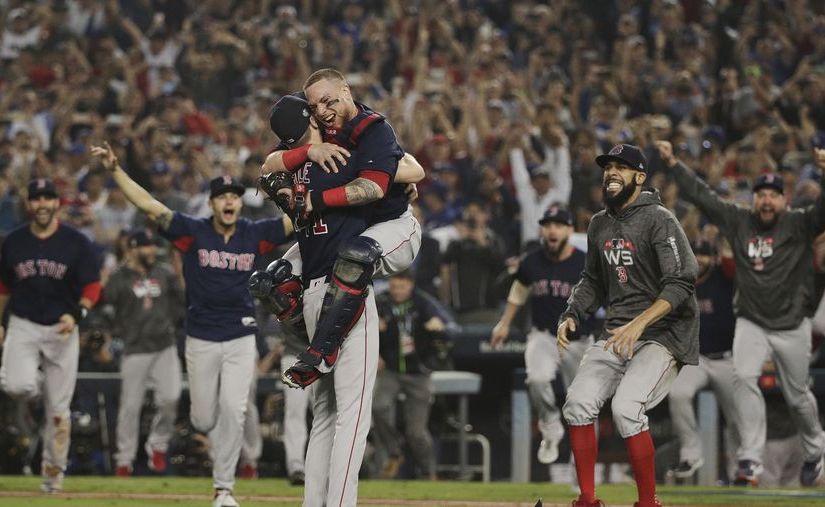 For the ninth time in their 117-year history, the Boston Red Sox are World Series champions.

In Game 1, Mookie Betts fulfilled Taco Bell’s “Steal A Base, Steal A Taco” promotion when he stole second in the first inning en route to scoring the opening run of the World Series. After trading the lead back and forth with Los Angeles, backup Third Baseman Eduardo Nunez hit a pinch-hit, three-run home run in the seventh inning to secure Boston’s 8-4 victory.

The Red Sox relied on small ball to win Game 2, scoring 5 runs without hitting a home run. A pair of doubles by Betts and Shortstop Xander Boegarts, as well as singles by First Baseman Steve Pearce and Designated Hitter J.D. Martinez, gave the Red Sox a 2-0 World Series lead behind a strong pitching performance from David Price, who seems to have shaken his post-season troubles.

After jumping out to a quick 2-0 series lead over the Los Angeles Dodgers, the Red Sox lost their only game of the series in a low scoring, 18-inning marathon Game 3. After trailing most of the game, ALCS MVP Jackie Bradley, Jr. hit a solo home run to tie the game in the 8th. The loss came due to an error by Second Baseman Ian Kinsler with a 1-run lead in the bottom of the 13th inning. Nathan Eovaldi, who was a strong contender for the Willie Mays World Series MVP, pitched almost an entire game’s worth of innings in the extra-innings portion of the Game 3 loss.

The Red Sox didn’t let Game 3 keep them down. Instead, they battled back from a 4-0 deficit in Game 4 to a decisive 9-6 victory. The heroes of Game 4 was the First Baseman Platoon of Mitch Moreland and Steve Pearce, who hit a home run a piece in order tie the game. The winning runs were driven in by back up Second Baseman Brock Holt and 22-year-old Third Baseman Rafael Devers. The Red Sox pitching was not great in Game 4, probably due to the fact that every available pitcher was used in the 18-inning Game 3, but they followed the “bend but don’t break” mentality to keep the team in the game.

The Red Sox came out to with hot bats in Game 5. In the first inning, Pearce hit a two-run home run. The Dodgers countered in the first when First Baseman David Freese hit a solo home run. Betts and Martinez followed up with solo shots of their own. Pearce wasn’t done in the first inning: he hit a second solo shot in the top of the 8th to seal the Red Sox victory and clinch the World Series MVP award for himself. Price pitched 7+ innings of 1-run baseball before giving the ball to flamethrower Joe Kelly, the Red Sox top postseason reliever, and starter-turned-reliever Chris Sale, who locked down the victory and the championship despite missing a start due to an undisclosed stomach illness during the ALCS.

Yes. We can. Once again, the Boston Red Sox are world champions.

Cameron Lapine is the Beyond Campus Editor for The Hilltopper and a senior Politics Major and History Minor at Saint Anselm College. He is from North Adams, Massachusetts. View all posts by Cameron Lapine