MANCHESTER – On Sunday, November 3, individuals from across the country gathered at the DoubleTree in Manchester for the No Labels: Problem Solver Convention. No Labels, a political organization whose mission is to combat partisan dysfunction in Congress, hosted the event that headlined multiple presidential candidates, members of the Congressional Problem Solvers Caucus, as well as current and former senators.

By The Hilltopper in Beyond Campus on November 6, 2019
No comments

MANCHESTER – On Sunday, November 3, individuals from across the country gathered at the DoubleTree in Manchester for the No Labels: Problem Solver Convention. No Labels, a political organization whose mission is to combat partisan dysfunction in Congress, hosted the event that headlined multiple presidential candidates, members of the Congressional Problem Solvers Caucus, as well as current and former senators.

Former Senator Joe Lieberman (I-CT) spoke early on in the program regarding the importance of the ideals and attitudes of No Labels. He discussed the widening partisan divide in the U.S. Congress, and how in many ways “it seems like the extremes are driving the train and the rest of us are along for the ride”. Lieberman warned of the dangers of polarization, anger, and resentment of those we disagree with. He argued that the growing number of registered independents, the problem-solvers, represented the new silent majority. Lieberman said, “America needs a little rebellion now [sic] a nonpartisan rebellion”.

Inspired by the ideals Senator Lieberman described, the Congressional Problem Solvers Caucus began its work 10 years ago in the House of Representatives looking for bipartisan solutions where they can be found in order to break the gridlock. The Caucus is comprised of 24 Democratic members and 24 Republican members, and it is currently co-chaired by Josh Gottheimer (D-NJ) and Tom Reed (R-NY). Members of the caucus were present at the convention and held a panel where they discussed their work in Congress coming to bipartisan solutions. In addition to Gottheimer and Reed, the panel included: U.S. Representatives Max Rose (D-NY); Tom Suozzi (D-NY); Brian Fitzpatrick (R-PA); Dan Meuser (R-PA); Xochitl Torres Small (D-NM); and Steve Watkins (R-KS).

No Labels’ Get In The Room Campaign is centered around encouraging congressional leaders to “get in the room” through constituent letters, calls, and emails in order to negotiate solutions for contentious issues. Convention organizers encouraged attendees to participate in the campaign in order to accomplish the goals of the organization.

Much of the convention was punctuated by a growing generational divide. The vast majority of the crowd was at or close to the retirement age, and such a difference was apparent. The older attendees, which comprised the majority of the audience, raised concerns about social security, partisan divide, term limits, and campaign finance reform; however, there was little mention of issues like wealth inequality and education reform.

A Connecticut resident, aged 28, mentioned that the exuberant cost of living in states like Connecticut meant that he was without much hope that he would ever own a home. This showed that younger generations focus on distinctly different issues from older generations. In fact, when one voter, aged 84, expressed a desire to make community colleges free in order to bring down the rising cost of education, another retirement-aged audience member cried out, asking how that could be done when pensions and the social security net was in jeopardy.

Increasing the political activism of younger generations was mentioned by Former Massachusetts Governor Bill Weld, who is currently challenging President Trump for the Republican nomination. He outlined a plan to increase the younger vote by making it possible to vote on your phone, where the voter would take a picture of themselves to verify their identity then email their vote to a government database. He made no mention of potential security and privacy issues that would come with this. Weld also suggested that Climate Change could be addressed by simply instituting a tax on carbon emissions of various corporations and businesses, but he offered little else on that front. To a younger audience member, both ideas seemed like yet another example of a 20th-century solution for 21st-century problems.

In addition to Weld, there were also three contenders for the Democratic Presidential Nomination present at the event: Congresswoman Tulsi Gabbard (D-HI); Congressman John Delany (D-MD); and author and activist Marianne Williamson. Gabbard was the first candidate to speak, and she also came into the audience to conduct an audience question and answer session. At one point she said that a president should focus on “not serving the needs of one party over another, but actually serving the needs of the American people”. Delaney echoed this sentiment, quoting President John F. Kennedy as saying, “let us not seek the Democratic answer, or the Republican answer, but the right answer.” Williamson called on the “people to step in” and reclaim their government. She also called for a “World War 2 sized mobilization” to address the threat of climate change.

Near the end of the convention, the organizers conducted a straw poll, asking voters “If you had to vote today, who would you vote for?” The end tally of the near 1500 audience members resulted in a “victory” for South Bend, Indiana Mayor Pete Buttigieg with 18.5% of the vote, followed by Congresswoman Tulsi Gabbard (D-HI) with 17.5% and former Maryland Rep. John Delaney with 14.2%. The three current leaders in national polling for the Democratic nomination, Joe Biden, Elizabeth Warren, and Bernie Sanders each received 6.9%, 5%, and 3.6% of the vote, respectively. The divergence from the national polling results could be due to the presence of supporters of the candidates speaking at the event, as well as the similar ideals of bipartisanship and cooperation amongst participants.

Special thanks to Chloe Cincotta, Madison Mangels, and the rest of New Hampshire No Labels for inviting the Hilltopper to this convention and providing us with press access.

Published by The Hilltopper

The Hilltopper is committed to providing Saint Anselm College students with accurate campus news and respectful dialogue about campus issues and issues beyond campus. In doing so, The Hilltopper will respect the dignity of individuals, include marginalized voices, and insist upon transparency from the College. The staff of the Hilltopper loves Saint Anselm College more than any other college in this country, and, exactly for this reason, insists upon the right to criticize it perpetually. View all posts by The Hilltopper 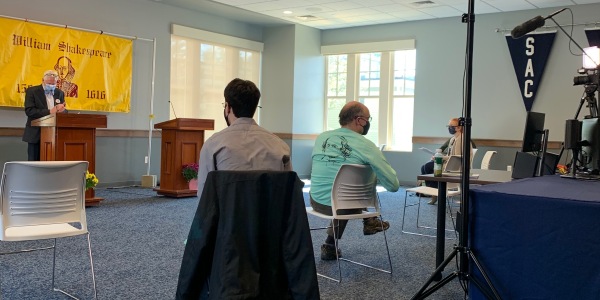