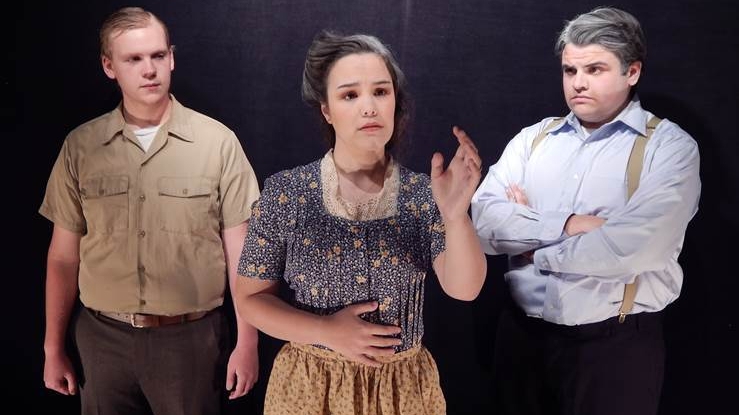 At this point, it should come as no surprise that the ever talented, passionate and engaging actors of the Anselmian Abbey Players delivered yet another knockout performance with their debut of Arthur Miller’s All My Sons.

Set after World War II, All My Sons follows the tragic and emotionally fragile life of Joe (Dragone) and Kate (Mutkoski) Keller, as they cope with the wartime disappearance of their son Larry. Chris (Lavoie), Joe and Kate’s sole surviving son, urges the family to move on and seeks to marry his brother’s widow, Ann Deever (Sherwood). Throughout the duration of the show, tensions grow and weaknesses are revealed as Joe attempts to provide the American dream of prosperity for his family while simultaneously battling demons of the past; Kate holds on to hope that her son Larry is alive despite the contrary beliefs of her family; Chris and Ann struggle to find peace in their love for each other; Ann’s brother George (Lewis) attempts to protect his families pride from the Kellers; and an imposing and nosey set of neighbors seek the latest gossip. This show is sure to keep audience members on the edge of their seats, and will leave everyone stunned, impressed, and astounded at the conclusion of this dramatic story.

I would highly recommend that everyone go see these incredibly talented Anselmians in the Abbey Players’ production of All My Sons. They never disappoint, and this show is no exception. Student tickets cost just $7, and you can attend this show either Friday, November 8 or Saturday, November 9 at 7:30 p.m.