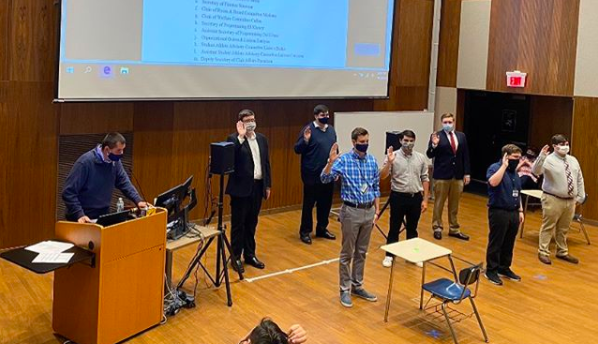 Amongst the confusion and chaos of adjusting to a new reality on campus, a select few students decided to become leaders of their respective class. The 2020 Class Council Elections were supposed to happen in March of 2020 with an info session already having taken place back in February. Despite the chaotic timeline of events, on September 2nd, the representatives of the Classes of 2021, 2022, and 2023 took the stage and were inaugurated.

The process for these candidates was fairly simple: first, they attended an info session and asked questions where necessary; second, they had their classmates sign their petition for candidacy (fifteen signatures were required this semester); third, they signed a waiver recognizing the rules of the race; finally they began their campaign. The last course of action for any candidate are the speeches which are held traditionally the night before the first day of the election. This year, speeches were  held in The Melucci Theater while onlookers and potential voters watched from Zoom. Broadcast Club was brought in to assist as well.

As for interest in the Class Council elections, it’s been average. The Senior class kept their elected members from last year, Juniors have an entirely new council made up of all males (all races went uncontested), and the Sophomores had the one contested race out of all classes for Senators with six people running for four spots. In past elections, there have been times when some ballots have empty positions with no one running which leads to a special election some time later – luckily this didn’t happen in this election. Voting interest has been sporadic to say the least. With the upperclassmen elections concluded, the senior class cast less than 30 votes, the Juniors cast around 60 votes, and the Sophomores cast over 80 votes. This is, unfortunately, average for Class Council elections excluding Freshmen.

When it comes to the SGA and its responsibilities, the average student would say “But Spencer, SGA doesn’t do [insert whatever you want here]”. This statement is incorrect by all means. It is this statement that may cause the low levels of turnout that is seen every Class Council Election. The Class Councils and the Student Government Association as a whole do a great deal. For example, members of the SGA not only sit on SGA committees such as Room and Board, Academic, and Welfare, but also sit on SAC administrative committees such as the Traffic Committee which oversees appeals for tickets, and even in the very near future the Board of Trustees. These two examples are not alone and represent two extremes. In terms of what originates from the SGA, the class presidents represent the class to the Administration whenever necessary, the SGA Appropriations Committee controls the money flow to clubs and organizations, SGA Club Affairs approve of clubs and control the process of creating clubs, and SGA officially speak on behalf of the student body on all issues and projects. In the end, the SGA does do much and those 30 to 60 members of your class are deciding who represents you for these decisions.

The Freshmen seem to take this memo well and have sent their best to the election. With all positions contested they are bound to have much interest with the voters (not to mention the fact that one of the Senate candidates got endorsed by Mr. Mosby). They will follow the same election procedures, just with a later timeline.. Voters will be able to cast their ballot today and tomorrow from 12p – 6p. The location for voting is Davison Hall’s entrance. If you have any issues, comments, or questions, feel free to email sgaip@anselm.edu