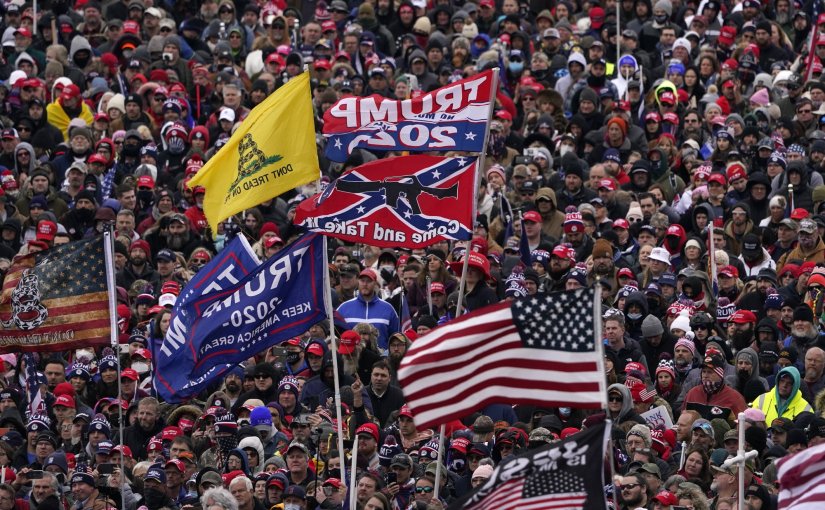 Wednesday, January 6, 2021, will be remembered as a sad shameful day in the history of the United States. The appalling, manic, and deeply un-American acts of terrorism committed around and within the Capitol building should, I certainly hope, represent rock-bottom for the Trump Era; an era already rife with moral lows. Perhaps what will remain the saddest legacy of the Trump Administration will be the denial and delusion that will linger after he leaves office.

To be clear: calling what happened Wednesday an act of domestic terrorism should not be a bombastic statement. In the halls of Congress, while the elected representatives of the nation are carrying out the will of the people, a mob that pledged allegiance to one man obstructed and delayed Congress’ carrying out the law. This was nothing close to a protest; this was an attempted coup. These insurrectionist made sure that there would be no peaceful transfer of power; anyone who believes otherwise, we must admit, is part of the problem.

There is no similarity between the George Floyd and Black Lives Matter protests of the summer, and the terrorism of Wednesday. Derek Chauvin actually knelt on the neck of George Floyd for 8 minutes and 47 seconds while he begged for air until he died. Breonna Taylor was actually shot five times in her sleep by law-enforcement. The election was not stolen from Donald Trump. Donald Trump is not secretly fighting an underworld cabal of Satanists and pedophiles, as has been suggested by conspiracy theorist groups such as QAnon. The BLM protesters demonstrated because they have legitimate claims and are fighting a righteous cause. Wednesday’s terrorists stormed the Capitol because they believe anything that comes from the mouth of Donald Trump and his MAGA cult of personality.

Wednesday’s terrorism was an example of mass delusion. The thousands of rioters delayed the peaceful transfer of power to President-Elect Joe Biden because they have been convinced without evidence that there was mass fraud and corruption in our election. One man bears responsibility for causing this mass delusion and invigorating these thugs by spewing baseless lies and conspiracy theories from the highest pulpit in the land: President Donald Trump. Trump, in his inability to accept his election loss, incited his supporters to disrupt the sacred process by which his power is transferred to his successor. Trump’s MAGA world is endemic in our society; his fervent supporters can be found in every state and county in the country. Yesterday was evidence that those who continue to support him and his conspiracy theories rest on a dangerous fringe of American politics.

I don’t begrudge those who voted for Donald Trump in 2016. Had I been of age, I might have voted for him too in my ignorance. I might be able to reconcile my frustration with those who voted for him in 2020, and then abandon ship when Trump began to shatter the walls of our beautiful democracy. I cannot, nor can the institutions of our nation tolerate and incorporate these fringe, dangerous, and undemocratic thoughts into civic life. Nor can we tolerate those who espouse them.

Where do we go from here? How do we move on from this terror and shameful chaos? The responsibility lies with those who supported the President through the past four years and somehow didn’t expect this. The GOP we knew before Trump is dead, and whatever rises out of Wednesday’s misery will and must come from those Republicans who can admit: this was a mistake, enough is enough. The GOP will bear the burden of the last four years, and the biggest burden will be the shame of January 6, 2021.

History will remember what we thought and did yesterday, and we cannot waste any more time pretending as though both sides have merit. The remnants of the Republican Party, most specifically the youngest members of the party, must be called upon to redeem their lost decency, to wipe away the tolerance of Trumpist authoritarianism, and to rebuild a spirit of love for our country, not for one man. These are the burdens the GOP bears and must come to terms with as we rebuild our democracy. There is a price to be paid for supporting a President who encourages acts of terror on our democracy, and I call on the Saint Anselm College Republicans, and all members of the GOP to start to pay that debt by condemning yesterday’s acts, and President Donald J. Trump.