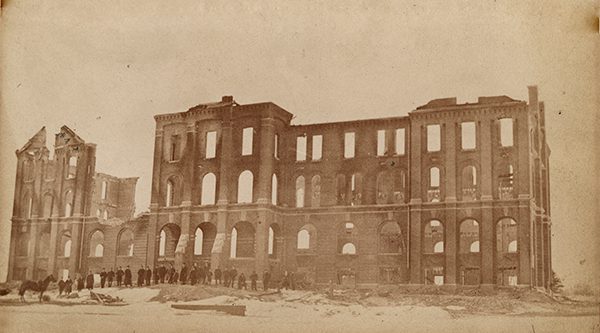 As first reported in the New Hampshire Union Leader on Thursday, Saint Anselm College eliminated 13 positions Thursday morning, laying off people across campus. The College issued a written statement to the paper, claiming that the positions were eliminated in an attempt to brace for “upcoming financial challenges.”

One staff member, who spoke on the condition of anonymity for fear of losing their own job, said that those fired were told early on Thursday morning and given little time before having to be off campus.

The Saint Anselm Crier reported on budget strains earlier this month. In that article, Chief of Staff Neil Levesque warned that budget cuts were imminent. There was no indication that some people would be laid off from their jobs. According to the Crier, “Levesque stated that the college had not made any decisions regarding staff, students, or faculty at the college for next year’s budget.”

Some of the people fired held positions that directly faced students. One was the administrative assistant in Campus Ministry. Service and Solidarity leader Emily Pierce ‘19 expressed dismay that she was let go. Responding to news that some of the employees fired were told to pack their belongings and leave campus immediately, Pierce said, “I went to this school for having values entirely opposite of that.”

Another was Vice President of Student Affairs Joe Horton ‘77. The student body has not yet been informed of the decision to relieve Dr. Horton. It is not yet clear how the college intends to restructure student affairs without a vice president to oversee it. Around two o’clock on Thursday afternoon, various deans and directors from the student affairs department were called into a meeting. A staff member, again speaking on the condition of anonymity for fear of losing their job, said that those in the meeting were told the school was facing a $1.6 million budget shortfall and that the Board of Trustees requested the college remedy the shortfall with $4 million in cuts.

In a written statement to The Hilltopper, the same one sent to the Union Leader, the college stated, “The college’s future is bright. However, based on long range financial projections, there was valid concern about the college’s current ability to meet upcoming financial challenges, and consensus that lowering our overall expense growth was critical.” It continued, “To achieve this important goal, in conjunction with the Board of Trustees, we engaged in a strategic and stringent financial review, encompassing policies, programs, and positions.” The statement did not include the specific numbers obtained by The Hilltopper.

On Friday morning, administrators, staff, faculty, and members of the monastic community gathered in the Dana Center to hear a prepared statement by President Steven DiSalvo.

According to detailed notes of the meeting taken by an attendee obtained by The Hilltopper, DiSalvo said the layoffs were part of the College’s “goal of building a long-term healthy and stable financial future.” He also maintained, “Our first priority is always to serve our students.”

He reportedly said that nothing could be taken for granted in the higher education marketplace. With this in mind, Saint Anselm College embarked on a financial review that resulted in a “targeted reduction of expenses” with the goal of ensuring financial stability through “operational efficiency.”

Even though at least one of those laid off was told to leave campus immediately upon packing her belongings, DiSalvo maintained that all 13 people who lost their jobs were “treated with dignity and respect.” He maintained that the Saint Anselm community was one that valued the work of our staff members and administrators “so deeply.” He said that he, too, was upset about the firings, but that the decisions were “necessary in order for Saint Anselm College to move forward.” According to a statement issued to The Hilltopper, those laid off received severance packages.

Uniformed campus security officers were waiting off stage for the president after his remarks. As he made his exit, one woman reportedly yelled, “Bullshit!” from the audience.

The full list of staff members laid off has not been released by the College, but several employees in the audience on Friday put together a list based on the people they knew had left. That list, obtained by The Hilltopper is: the Vice President of Human Resources and Administration, the Vice President of Student Affairs, an Associate Vice President who served as the college’s Title IX Coordinator, the Dana Center Director, the Conference and Events Services Coordinator, an executive assistant, the administrative assistant in Campus Ministry, the administrative assistant in the Communications Office, a switchboard operator, the Director of Media Relations, the Director of Institutional Research, and a cashier in the financial office. The list has been confirmed by multiple staff members at the college but there are conflicting reports about the final position that was eliminated.

Nick Fulchino is the Editor-in-Chief of The Hilltopper and a senior at Saint Anselm College. He is from Pomfret, Connecticut. View all posts by Nick Fulchino

5 thoughts on “Fired on the Hilltop: College Lays Off 13”